Author Erica Alini, Globe and Mail writer and author of Money Like You Mean It, Personal Finance Tactics for the Real World, Dundurn Press, Dec. 2021 Published May 31, 2022

Excerpts from the article. To read the full article, visit the Globe and Mail or click The Globe and Mail – How much should you get paid_ New pay transparency rules may give you insights May 31, 2022.

also the date when employers in Prince Edward Island will have to start including salary rates or ranges in any publicly advertised job postings.”

The laws will likely give women, and other groups such as racialized workers and those with disabilities, better leverage to obtain fair compensation, some economists and human-resources experts say.

In Canada, a recent study of university faculty across the country found that the pay gap between men and women shrunk by approximately 20 per cent to 40 per cent thanks to provincial “sunshine list” salary disclosures for higher-earning public-sector workers.

Researchers have also found that transparency requirements can lead to downward pressure on wage levels or wage growth. In her research, Dr. Cullen found greater transparency incentivizes employers to bargain more aggressively because individual salary negotiations are likely to have “spillover” effects affecting the compensation of other workers.

On the other hand, forcing employers to publish salary information for job postings could help push up salaries over all, although economists have just begun to study those more recent measures, Dr. Cullen noted. 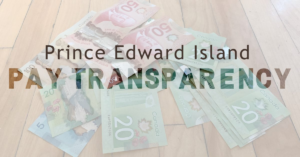 “If it were the case that a significant share of employees started applying to higher-paying jobs, that should, in aggregate, increase competition,” she said.

That’s the impact Wendy MacIntyre, owner of ResolveHR in Charlottetown, expects the PEI rules will have on local businesses in the current labour shortage. “Because if everybody’s struggling to get employees, you want to have an idea that you’re at least in the ballpark with your competitors,” she said.

And while the PEI law applies to public job ads, Ms. MacIntyre expects it will also have a knock-on effect on word-of-mouth recruiting, which remains common in the province.

The new transparency rules affect only a sliver of Canada’s workers and employers, but their impact may have wider reverberations, experts say.

While Canada’s federally regulated private companies count fewer than one million employees – or less than 6 per cent of the private-sector work force – they include large employers such as the banks, whose HR practices tend to influence even provincially regulated companies, according to HR expert Allison Venditti.

“Everybody else has to match what they’re doing because they’re such a huge piece of the white-collar labour market,” said Ms. Venditti, who is the founder of career coaching platforms Moms at Work and My Parental Leave.

When it comes to job postings, transparency measures like PEI’s may soon come to other provinces. Similar legislation in Ontario received royal assent in 2018, though the province has yet to implement it. British Columbia is also considering new disclosure rules.

Do you anticipate any challenges in applying the new legislation? Let’s connect!